Why I Volunteer: More Than Painting Nails

Why I Volunteer: More Than Painting Nails 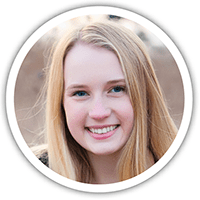 When I was young, my favorite sleepover activity was painting nails. For my eleventh birthday, a friend gave me twenty Dollar Store nail polishes, and my friends and I had a ball giving each other manicures and pedicures in every color imaginable. We expressed our creativity with bold color combinations, resulting in vibrantly trendy fingers. This past year, I once again enjoyed giving people manicures but in a different way and for different reasons.

My first day volunteering at Luther Manor, my shyness caused anxiety to flood my mind as I anticipated talking with residents. Nevertheless, I searched the residential hallways, manicuring kit in hand, and found my first client in a lobby. Nervous, I set the polishes up neatly, laid down the small towel, put my gloves on, and carefully followed the beginning procedure exactly the way the volunteer coordinator had explained.

“Hi, my name is Catie. What’s yours?” The woman answered slowly, words slurring together in an unintelligible mass of syllables. “What?” I asked. “Sorry I didn’t understand you.” A hot, uncomfortable flush swept across my face as she repeated herself, and again I could not make out her words. “Nice to meet you,” I exclaimed, hoping I could redeem myself by producing beautiful nails. After establishing that she was open to any color on her nails, we spent the rest our visit in silence. Not only was I unsure of what to say, but I was also afraid to say anything at all because I probably wouldn’t understand her response. Despite the awkward interaction, the woman smiled gratefully, admiring her stylish fingers. I continued on to other residents, meeting some women who could talk for days and others who preferred to watch their TV programs.

Going to Luther Manor became the highlight of my weeks. It pushed me outside of the comfortable, the known. I found new ways to communicate or appreciate the silent company of my clients. I grew close to some of the residents, including the woman I’d met the first day. I learned that she was, in fact, an adept and even feisty communicator. Instead of using words, she enjoyed rolling her eyes and swatting her hand in the direction of people and their insufficient ideas; but, she was always very sweet and caring when I did her nails.

At Luther Manor, I came to realize that I don’t savor my time volunteering simply because I love painting nails. Rather, I come for the glimpses into the personalities of the strong and wise women who surround me. I come to hear stories, to tell my own, to enjoy the company. I leave with a more vibrant and colorful result than that which I am able to produce on the nails of my clients. I leave knowing that I have given some love and received much more than I could have imagined.